The Virgin birth and a faux Chinese Chest

Christmas. It used to have a religious significance for me. But that was a long time ago, the fifties and sixties when I believed almost everything, anyone told me. And I was a dutiful sort of person, obedient, willing and looking for a story that would explain the strangeness of ‘being’, human.

Then I had a family and Christmas was nostalgia and the creation of my own new story, a family story. It was sewing Christmas stockings that we still use, in spite of my limited skills as a sewer. Each year, I bring out the stockings for a brief cameo and then I stow them away in a faux Chinese wooden chest where we keep newspaper clippings and the Christmas lights. 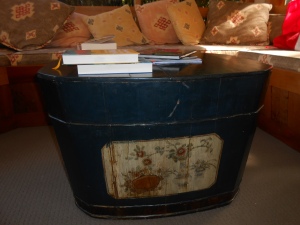 A virgin birth. It never occurred to me as a child how odd this was. How could a child be cynical about the Angel Gabriel arriving on a beautiful cloud? Mary so pious (in various versions, possibly a little startled), but attractively compliant. You have to remember, I was a Catholic girl who read her Catechism and could recite the Apostles Creed in English and possibly parts of it in Latin. The Angel Gabriel arriving at the annunciation was a powerful fairy-tale.

I had no sympathy for Mary who was to carry this unplanned pregnancy. I was filled with the light of El Greco paintings on Colomban calendars, sermons from a small church in Richmond – Our Lady of Perpetual Succour. And then after abandoning my faith, and travelling for a few years, eventually I married the man I’d been ‘living in sin’ with for almost five years.. and became that very Lady of Perpetual Succour… a wife and mother.

I’m older now, and there are decades between my love of filling stockings at midnight, baking the cake weeks before, writing cards, attending Midnight Mass (merely for nostalgia and now not at all), buying a real Christmas tree, decorating it, making food that will please everyone, and then, finally, realising, that it’s not up to me, and you cannot ever please everyone.

I no longer weep when Christmas music (Snoopy’s Christmas) comes on the radio. I still dance to the Pogues ‘Fairytale of New York’ because my granddaughter has been dancing to it with me for seven and a half years…

In my life-time, I have celebrated Christmas in Richmond, Nelson, Wellington, Washington DC, Norway (Santa arrived on Christmas eve in the snow), Edinburgh (practically alone), Istanbul (snow again) and Laos.

I’ve experienced joy and disappointment and one of my most memorable gifts was a swimsuit from an Aunt when I was about eight years old – it was covered in Christmas pink bon-bons and had a pink bow placed strategically at the base of the bodice where it flared into a cute skirt – prior to that I’d worn my Mother’s seersucker, over-sized swimsuit (with bra cups that possibly kept me afloat).

It’s New Year now in our bay. The Pohutakawa next door is flowering. We’re re-united with our son who has been living overseas for ten years. We had a happy Christmas family breakfast and thoughtful inexpensive gifts under the tree. We were almost sitcom material on New Year’s Day with everyone on their best behaviour. Our granddaughter is besotted with her Uncle and we’re all besotted with her.

This year, I want to embrace being human, and to recognise the glorious potential of difference, rather than indifference, the beauty of the individual rather than the duty of togetherness, the magic of family in all its inordinate incarnations.

10 thoughts on “The Virgin birth and a faux Chinese chest”