We were planning to visit Japan. Our son and his wife live in Seoul and it seemed like a great scheme to fly there via Japan in the season of blossoms. Alas, the now historic earthquake struck, followed by a tsunami and we decided to change our travel plans (thinking perhaps that Japan did not need tourists right at this time).

So, where do you go, when Japan is off the itinerary? We decided it was time to visit Cuba – a place we had hankerd to see ever since Ry Cooder rode his motor cycle around this country and discovered the Buena Vista Social Club. And so, we went, via Panama, as you do, because you cannot on a commercial airliner, fly direct from the USA. How odd this is when you think seriously about it and how entrenched the squabble is, when after all, the Berlin Wall came down in 1989. I’ve been to Berlin and to the Stasi Museum which is a whole other story.

We flew the 11 hours to Los Angeles, and transited there, which required a full body scan (I’m a grandmother now, so what do I care) and then we flew to Panama, another six hours. Panama is a fascinating place all by itself and perhaps worthy of a separate blog. It was exciting to be there because it features large in many Kiwi lives during the 60’s and 70’s en route to the big OE and the UK. I came home in the mid seventies via the Suez Canal (which had just re-opened), but did not go to England via the Panama. And so it felt like some sort of belated rite of passage, standing there, watching the locks rise and fall.
But, our destination was Cuba.

Oh Cuba. Where do I begin? I think the photographs that I am going to post will probably speak louder than anything I can say. These photographs are the work of John Rainey-Smith, my partner in life and I’m delighted to share them with you. There is so much to say about Cuba and I don’t think anything could really capture the spirit, the colour, the delight, but I think his photographs are indeed eloquent. 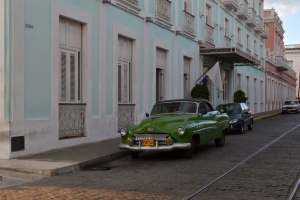 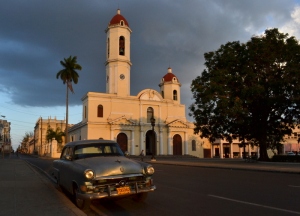 Enough to say, that we were enchanted, and you know how it is, sometimes when you have wanted for a long time to visit somewhere and the imagination is greater than the event – in this case, it was not so. Cuba is colour in every sense, and Cuba is history in a crazy time warp. Cuba is testament to the madness of the United States foreign policy, a study in intransigence – how silly can we be. But Cuba triumphs too. Of course, Fidel is not blameless and I’m not a political analyst, just a tourist. Oh what a dream that a doctor from Argentina had… Che; immortalised on tee-shirts and billboards, a rally cry to all young radicals, his memory somehow woven into the Cuban psyche.

We stayed in Havana, at the Hotel Nacional (home of the Mafia really in those heady early days). 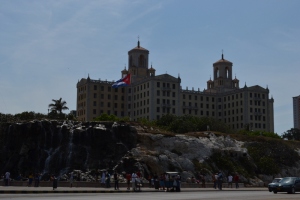 Oh, the incongruity of Cuba, the crazy dichotomies of grandeur, of passion, of salsa and sleaze, of social reform now on ice and melting, like the daiquiris that Hemingway sipped. 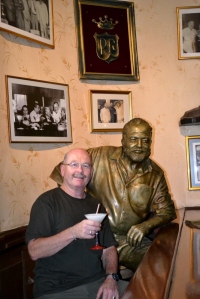 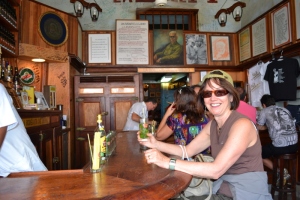 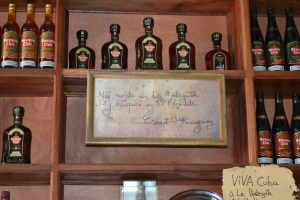 I can remember with vivid clarity, where I was when the Cuban Missile Crisis impacted on the world in the sixties. I recall standing in my Waimea Intermediate gingham red and white all in one button-through frock, wearing my Panama hat (except now I know that actually it was an Ecuadorian hat that people wore in Panama)… my hands were on my bicycle handlebars and I was looking down the asphalt driveway towards the bike sheds with fear in my heart… I had left home that morning after the radio broadcast and my parents conversation – that possibly, just possibly, Word War III was about to begin. (Yes, we lived sheltered lives back then and just as McCarthyism was rife in the USA, we too were terrified in the working class suburbs of New Zealand).

At the airport, en-route to Cuba, I was looking for a book about Cuba which I could not find, and on impulse I grabbed instead, with no real intent or knowledge, ‘On Green Dolphin Street’ by Sebastian Faulks. It is a tender, terrific love story based in the United States during the McCarthy years. And of course, there are very few writers of Faulk’s ability who can render love and history in such a compelling fashion. It turned out to be the perfect book to be reading really while travelling through Cuba, caught in a sixties time-warp. It seems inevitable me that the USA must, sooner, rather than later, open the door to Cuba and what a travesty if Coca Cola and McDonalds begin to colonise Cuba. For the past fifty years, the Cubans it seems have farmed organically, being unable to afford the chemical fertilisers or indeed the mechanisation (we saw men ploughing fields by hand and with bullocks pulling ploughs) – imagine if Trader Joe’s in the USA could buy fresh organic produce from Cuba – black beans for starters, strawberries, fresh lobster…

Our trip was booked through Intrepid Travel, although intrepid is perhaps an exaggeration. We were entirely comfortable, well fed and safe, for the entire journey and apart from miserly squares of tough toilet tissue that you have to pay for at most local toilets, everything else was probably quite luxurious in comparison to what I had imagined. Our accommodation was a mixture of flash hotels (think Mafia style palatial) and home-stays (humble, yet spotless and welcoming Casas). And of course for a writer, Havana is so much fun.

I’d heard of Fidel, of Che, but not of José Martí and so I found on-line a translation of his poem ‘A Sincere Man’ and these following lines of the translation seem particularly pertinent.

And seen butterflies emerging
From the refuse heap that moulders

I shall be seeking out more translations of José Martí’s poetry.

And now, my own poem and John’s amazing photos…

Dear Cuba;
I love your faded glory
your broken cobbles
the pink, pink and green of you
and too, the blue
your crumbling
buildings
the Malecon
where cool winds
speak of Cuban love
at night
star-bright on old Habana
mint in our Mojitas
Hemingway on our mind
music in our hearts.

Viñales;
the Casa Tamargo
a blind singer and salsa
the way we danced each foreign beat
from three to five
to rest on four
facing full length mirrors
on a dusty floor.

Cienfuegos;
your square
the rotunda and
El Palatino, outside
where I danced
with a drunken old man
seduced by his toothless
smile,
and a Pina Colada.

Trinidad;
with your crazy cave disco
hinting at grandeur
thumbing your nose at decay
setting grand tables
visible through shuttered windows
lace and linen
fine wine even
cobbles worn to slippery
our suitcases
sliding on marble

Santa Clara;
here, where
an Argentinean doctor
who believed
he could change the world
piece by piece
(beloved friend of Camilo)
is buried.
Che
an eloquent star burns
bright in your tomb
a light
for a dream
frozen in time…

José Martí; a sincere man
on your white horse
in your black jacket
defiant to the end
the seeds of
revolution
in your legend

Cuba, I love you
the heart of you
the music in you
the colour of you
you are
art among the arts

I feel John’s photographs are the real highlight and so I’m going to open a gallery for those of you who wish to take a peek at Cuba.
Some lovely candid people shots (he mostly asked permission!) – scroll through and enjoy. 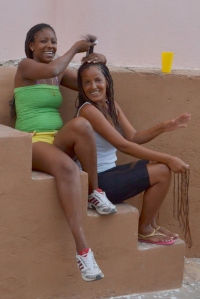 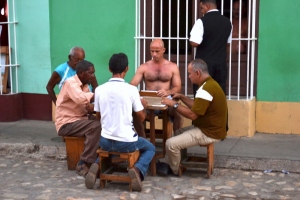 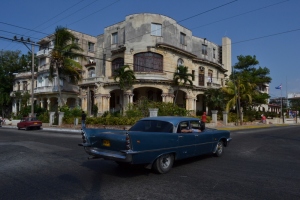 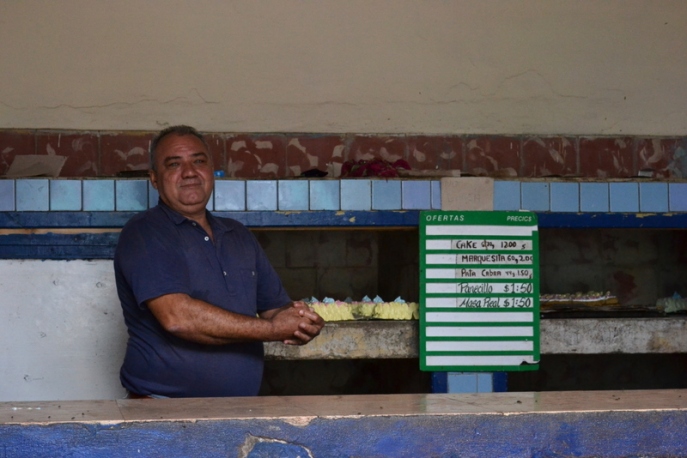 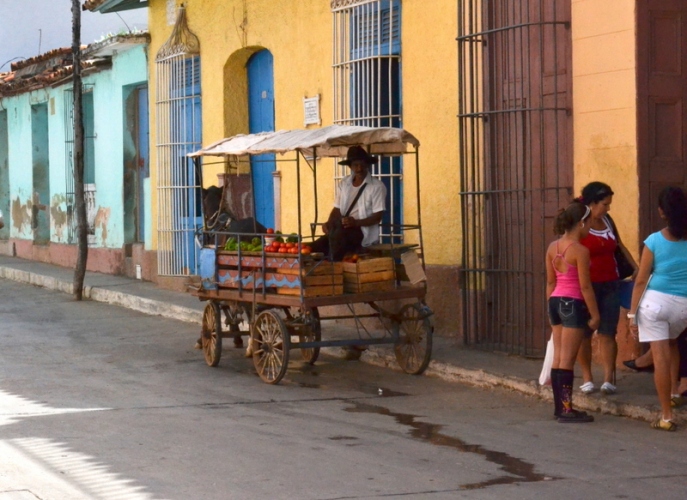 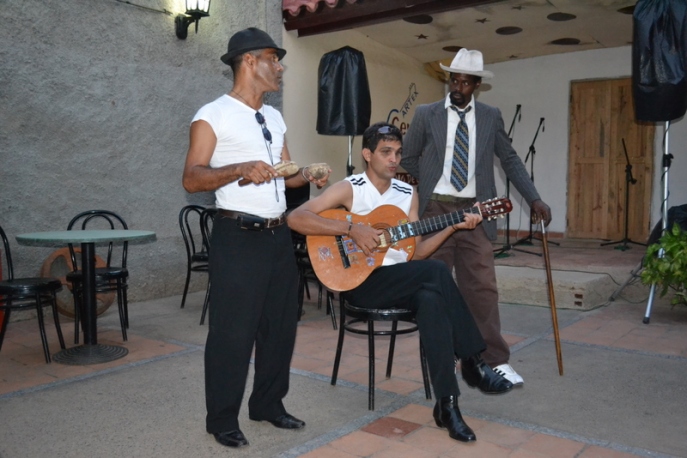 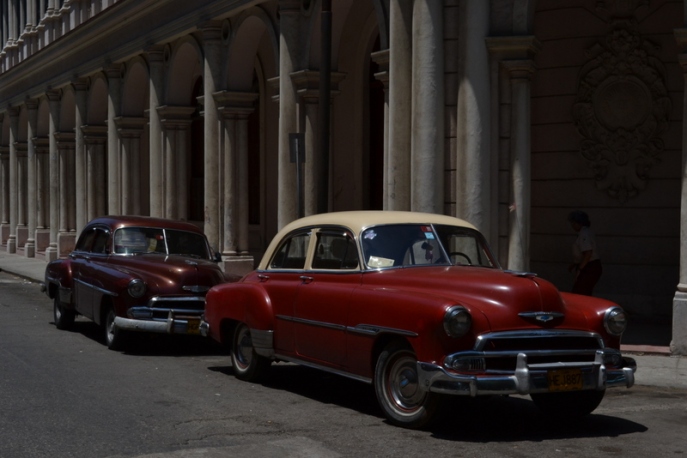 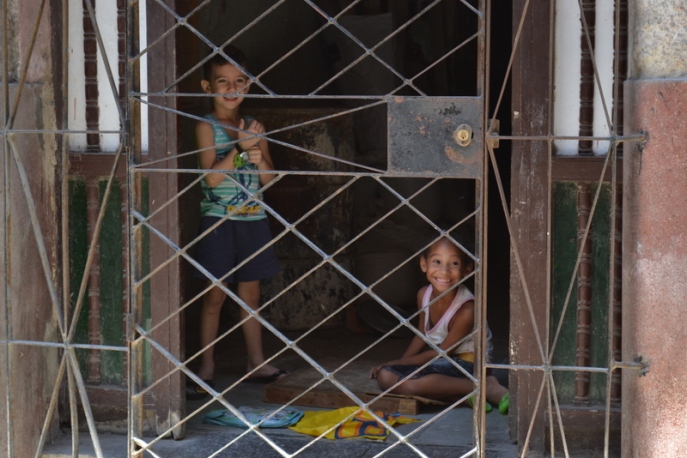