Recently, I attended a high tea for a friend’s 70th birthday.   We were all girls and we dined on dainty sandwiches, sipped tea in china cups and ate pretty cakes. 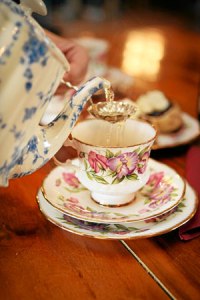 My friend is a writer and she asked if her friends would bring a poem they could read at her birthday.   She especially wanted something that spoke of age and being a woman.   I took my ‘Menopause’ poem and read it.    It seemed to strike a chord.

I’m in that genre now, the one made famous by Ursula Le Guin in her essay on ‘The Space Crone’.  In fact I think I’ve passed through the planet Altair already.  My poem is a response to Ursula’s essay.     It had its debut in New Zealand Books, Volume 17, Number 2, Issue 78 in the Winter of 2007.     I see that New Zealand Books will soon be celebrating the launch of their 100th issue at Unity Books in late November.

(Inspired by an essay by Ursula K. Le Guin “The

Ursula urges me to

my wit, my wisdom

my years of fertility

so the fourth planet Altair

can learn about the human race

from a woman (once a virgin)

But I’m all for my inner space

and I won’t go grey

well, not yet, not today

because I still want to play

to flaunt in the twilight

my age now my highlight

on the cusp of something

almost a Crone – not quite

but not afraid either

thumb out – hitching a ride

not looking back, nor

pausing as they say – oh,

but not for men

2 thoughts on “Ursula LeGuin, High Tea and the Menopause”