We’ve been talking about the Catlins now for many years.  It’s become that mythical place down south, that others have visited. They have regaled us with their journeys, marvelled, and mentioned the rogue waves at Cathedral Caves. How the water rose suddenly, possibly waist height or perhaps they or I have exaggerated this. But still, the Catlins sounded wild, other, and we kept promising ourselves to go there.

Back in 2005, we got close. We flew to Invercargill and grouped at Tuatapere to set off on the Humpridge Track. A luxury walk, with a helicopter carrying our luggage aloft, dangling from the craft in a large net-like basket. A celebrity accompanied each group and our celebrity was so low level that none of us had heard of him before, and I still can’t recall his name.

But, this Easter after our usual mulled wine and home-made hot cross bun festivities on Good Friday…

… we finally flew south to Dunedin enroute to the Catlins.

I caught up with an old school friend whom I hadn’t seen since Form II (the sixties and now we are both in our sixties). John indulged this re-connection made possible through Facebook initially.  My friend has become a talented artist and somewhat of a recluse.

Dunedin was cold and chilly but the railway station was a revelation. Such splendour and beauty and we’ve promised ourselves to return and take the Taieri Gorge train trip someday.

We set off in our sweetly named Tivoli hire car. John who’s had a love affair with cars over many years, conceded that this compact, toy-like vehicle was actually a great machine with all the digital accoutrements that our cliched Subaru Outback lacks. We listened to podcasts as we headed to the Coast. 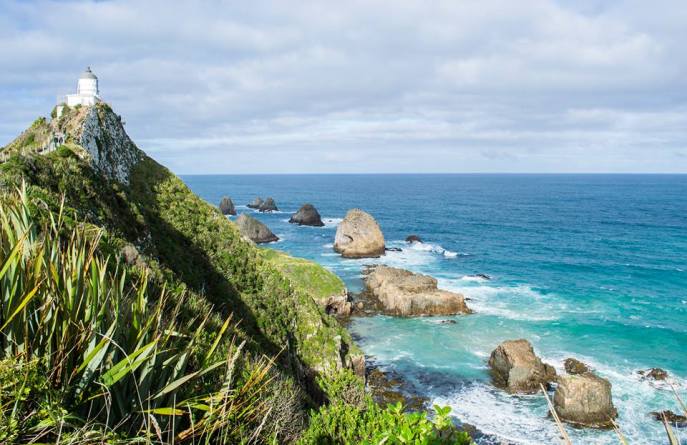 At first, approaching Nugget Point, I was underwhelmed, comparing it to Kaikoura and Cape Foulwind, claiming they were more spectacular… but then we climbed up to the Lighthouse and looked out at the expanse of sea and coastline in all its glory.  I scanned the water prayerfully, hoping to see a whale, held my breath, wishing it into existence. No whales, but the water mesmerised. I have this weird issue that I suffer silently whenever I’m on high cliffs or looking into any kind of chasm or abyss… my brain tells me to jump and it’s not a death wish, it’s a weird and strange thing I’ve endured all my life. I know that I won’t jump but still this little battle ensues in my head and sometimes I have to just step back, close my eyes and gather my breath, alter my thought patterns.

John oblivious with his camera is always teetering at the edge, taking risks to capture the best photo, so I’ve learned to stop watching him.

We stayed at Owaka the first night and what hospitality. Our motel was mainstream budget with a room next to the laundry so we could hear the hum and throb of the other occupants washing. We had a goat tethered outside our front sliding glass door, eating the shrubs and sheep grazing out another window. We walked that night to the Lumberjack café. There was a warm fire to greet us, friendly staff and one of the nicest meals ever – John had steak and I had a lamb rump – maybe it was the proximity to the grown food, or just the expertise of the chef, but the food was mouth-wateringly good.

We walked home to the smell of coal fires and a clear sky, reminding me of my 50’s childhood. Under the canopy of the Milky Way we watched for falling stars and texted a friend in Niue to find to our surprise that it was the day before over there.

I took a quick snap of the teapot museum as we were leaving Owaka and we hit the trail for Cathedral Caves. Ever the dramatist I had concerns about us being trapped by the tide. Instead we had the most beautiful sunlit morning and easy access both in and out of the caves. A small posse of tourists got caught just after we left, as a rogue wave stranded them on rocks, but they loved that. The great beauty of these caves is their natural un-enhanced beauty, unlike the neon-lit caves we visited at Halong Bay a few years ago in Vietnam. 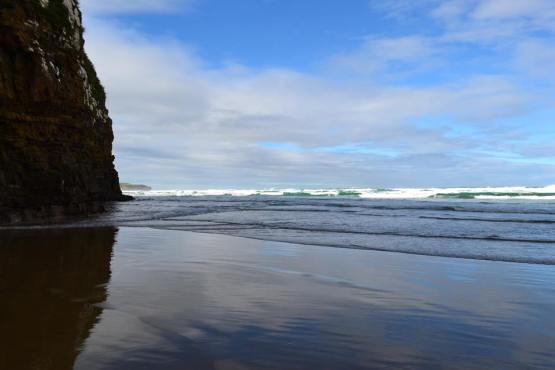 Then it was onwards to Curio Bay. I have memories from a marching trip in the sixties, being on the train, heading to Invercargill and we looked out the window at what we were told was the ‘Petrified Forest’, so I had images of upright trees, etched into my brain, ghostly, devoid of foliage, but standing.  Everyone I tell this story to shakes their head in disbelief and tells me I got it wrong. And they are right. The Petrified Forest at Curio Bay is our very own Jurassic Park but very different from this memory etched image in my brain and indeed, the train did not run anywhere near this piece of Coast (or so they tell me). The forest was washed by the tide over 180 million years ago. It’s impossible to take in or truly imagine. John was once again lost in his photo lens stooping to capture the petrified markings on the trees. 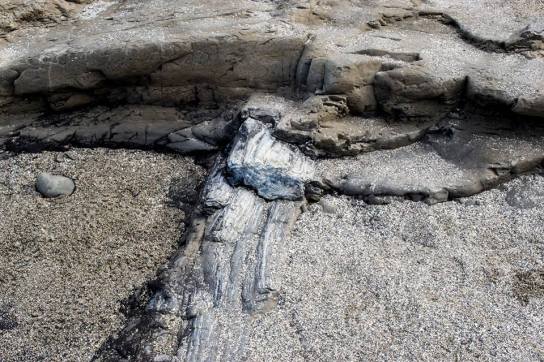 I think of Ancient Messini in Kalamata and how we marvelled at the uncoverings, but these petrified trees are unimaginably older. I still can’t believe that tourists have free access to wander at will, and too, there are the nesting yellow-eyed penguins (we didn’t see any wildlife, and we’ve been told that late April is too late in the season). So, we may need to return.

After Curio Bay, we at lunch at Niagara Falls Café, housed in an old school building in a charming bucolic setting. The café is run by a family whose daughter is a medal winning Para Olympian and her medals are there on show, casually amid the food cabinets and bric-a-brac – no high security required for such precious memorabilia.

We spend the night in an overly spacious (expensive, but all that was available), four bedroomed house right on the peaceful harbour at a place called Waikava Harbour View, and yet the settlement is called Wakawa, the discrepancy we couldn’t quite fathom.

The promised Wi-Fi didn’t eventuate and here are two brilliant comments from guests which caught my fancy!  You gotta love the Visitors’ book.

In the morning, after a very comfortable stay, we packed up, put our suitcases in the car and then returned to sit and enjoy the view and sunshine, only to be disturbed by a local coming, we think, to clean the house… she stood at the door, tapping her watch saying, ‘What’s the story – you’re supposed to be gone by 10.’

Like naughty school children we scuttled to the car and fell about laughing in the car at having been scolded so old-school style.

2 thoughts on “Our very own Jurassic Park”