Recently, I spent three months as a volunteer ESOL teacher in Siem Reap, Cambodia. I’ve left a part of my heart behind. Some people said, before I left, what a grubby little tourist town Siem Reap was and that I wouldn’t like it. How wrong could they be? I loved it. I love the red dusty roads that erupt whenever the rain falls; the smell of the Monsoon and dust, the sound of motos, the choreography of traffic, tuk-tuks, motos, cyclists, pedestrians and the occasional big black Lexus.

I love the resilient spirit of the people of Siem Reap, their optimism, in the face of endless rejection – from the girls on massage lane to the tuk-tuk drivers – always hopeful, up for a chat, and the cries of ‘teacher-teacher’. Where else could I possibly find so much (possibly undeserved) affirmation and respect? I can’t imagine being embraced so affectionately at my local coffee bar back home, nor having my eyes wiped by an attentive waitress (who just happens also to be my student), when I choke on a chilli over dinner. Or to go out alone, and find each time I enter a café, that one of my students is waiting tables there and I’m suddenly the most important customer. 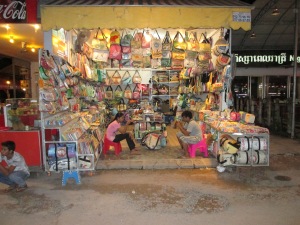 I loved the one dollar out-door foot massage where I watched endless reruns of the story of Angkor Wat on a large open-air screen… the foot scrub for two dollars, the pedicure that ended up a brighter pink than I chose, and the nail polish that was very poor quality, so the finish was less than smooth, but the effort and focus gone into painting my toes far outweighed the less than perfect outcome.

The people of Siem Reap put their hearts on the line for the tourists. They offer up a piece of themselves for a small price. They work long hours for little return and the tuk-tuk drivers spend more time waiting for customers than they do actually driving anywhere. In the heat of the mid afternoon they sling their hammocks and rest. They are waiting for the balmy evening when the tourists will begin swarming down to Pub Street and maybe they can nab a newcomer and sell them a trip to the temples tomorrow… always tomorrow … the locals here believe in tomorrow in a way that is heart-warming and admirable.

Madame, you want tuk-tuk, maybe not today, maybe tomorrow, maybe the temples, not today Madame, but tomorrow maybe, you call me, you have my card, tomorrow, tomorrow, I take you to the temples, Madame, Madame…

It’s one sentence, because they anticipate your rejection and already they’re moving with a smile to the next potential customer.

I loved the Old Market, the Night Market (there are several Night Markets) and the food – the food loved me too. I ate the juiciest mangoes I’ve ever tasted, sweet pineapple, longans, dragon fruit, and I never tired of the Khmer vegetable curries and the chilled 50 cent Angkor beers, not to mention the one dollar Margaritas on Soksan Road.

I found French pastries at the Blue Pumpkin, a designer cupcake café and the New Leaf Book Café where they make the most delicious banana blossom salad while selling second-hand books. And too, minus the food, D’s bookshop (both second-hand and new).

I admired the ‘flower girl’ as I christened her. The same girl every night, plying her flowers along Pub Street, her witty patter, her sassy street-smarts and who knows, she looked fifteen, but perhaps she was older. I admired too, the young man (whom I decided ran away from the circus), who ran his own one-man-band sort of circus, swallowing fire, and juggling outside the cafés in the balmy evenings, his shiny naked skinny torso and the young boy who made the chocolate banana pancakes with such flair, one hand wiping, the other hand swiping, cooking and cleaning at the same time.

And yes, I stood with all the hundreds of other tourists at dawn, waiting for the sun rise at Angkor Wat.

But it wasn’t so much about the temples for me, as the local people. I enjoyed a cycling alone to the temples on the school bicycle. The first time I’ve ever cycled close to an elephant or a monkey for that matter. I tried to imagine a quieter time, when the temples were abandoned and overgrown but not with tourists, the eerie mix of nature and man-made stone grandeur, uninhabited.

One of the highlights for me wasn’t the temples, but the evening I rode pillion on a student’s moto into the balmy late afternoon-straight-into-evening – along the canal to Road 60 for a Khmer-style picnic with one of my classes (barbecued chicken with yummy seasonings from the local roadside stalls) and being one of only a handful of barangs.

As for the circus. If you never do anything else in Siem Reap, go to the Phare Cambodian Circus which describes itself as uniquely Cambodian, daringly modern. Be startled and astonished by the amazing acrobatics, the sheer energy, talent and something else… delight at its best, in its best form – delight from the performers and delight from the audience. This is what I found in Cambodia – you think you’re giving when mostly you are receiving.

But most of all I loved waking at 5.00 am to chase the frogs from the kitchen after the Monsoon and once too, a cheeky rat ran out from behind the portable gas hob. I would make porridge and drink black tea in the make-shift outside dining room. I’d feed the school cat in the hopes she would keep the rat at bay. And then, after gathering my lesson plans, at around 5.50 am each morning, I would pull the shiny yellow curtains in my bedroom open and see my always-early student Phanna, on his moto heading towards the school gates. He never failed me. And soon after, the rest of the class. At 6.00 am the Elementary One class would begin, with the fans going and the doors wide open. I would watch the dawn break as I taught. That moment between dawn and morning, the shifts in colour. Magic. But more than that, the amazing energy and affection that my students rewarded me with. There was no ‘class management’ required, I had rapt attention from hard-working, motivated, interesting and hugely admirable young adults. What more could a teacher ask for?

What I most admired is the extraordinary spirit of my students and all their golden hopes for tomorrow. I felt humbled by their resilience, their hard work, their generosity and their humour. It is hard to imagine a country with such a recent tragic history, where there is such a spirit of optimism.

I’m not forgetting though, there is much more to Cambodia than Siem Reap and my students. I saw the poverty between Siem Reap and Phnom Phen when I took the Giant Ibis bus journey between the two cities the weekend of the water festival. The way people live with their rice crops drying at the side of the road, no fresh running water or electricity, relying on oxen and water buffalo instead of modern-day farming methods. I was reminded of Cuba. I know the Government is corrupt, the recent elections weren’t fair and that people live in abject poverty. I read Joel Brinkley’s ‘Cambodia’s Curse’ before I left for Siem Reap and while I was there. It is without doubt a very sobering account of Cambodia’s history. I know it’s time for Hun Sen to go and democracy to have a fair chance. But somewhere in my heart, I have great hope, if the young people I taught, are an example of what lies ahead.