For Christmas, I bought myself a copy of Alex Miller’s memoir ‘The Simplest Words’, a series of sometimes quite short personal essays. I’m only part way into reading them but was struck to the core by his essay about the death of his elderly mother. He begins with a low-key description of a week they spent together when she was 86 years old. Indeed, he points out, that she pointed out, that this was the first time the two of them had ever spent a week alone together. He lives in Australia and left home aged sixteen to follow his Antipodean dream, and then became a writer. This essay-vignette, one week, ends with Alex and his mother walking home arm in arm from a pub after polishing off a bottle of Spanish wine, ‘Bulls Blood’. 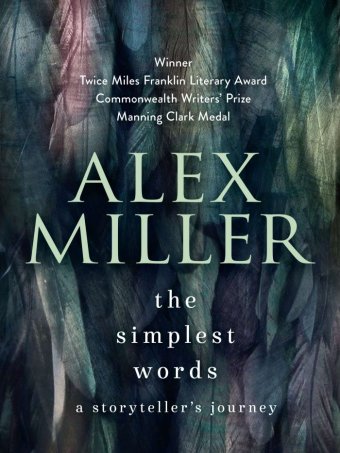 I was reading this sitting at a café overlooking our beautiful local bay. The water unusually calm, one person swimming, a grandmother towelling down her granddaughter, and a motor boat noiselessly edging towards the beach. A woman beside me was talking loudly on her mobile. I frowned first and then decided I would eavesdrop (I’m a writer), but she stopped before anything useful was uttered. I returned to Alex Miller.

Tragically, after spending this memorable week with his mother, a few weeks later when she was dying, he had to choose between returning to the United Kingdom to see her or his commitment to a new job at La Trobe University, Melbourne, teaching creative writing. He explains that he chose to stay with his students who had given him the gift of their unpolished first drafts – and to abandon them would be to betray that trust. He then goes on to say that it took six weeks for his elderly mother to die and when he returned some time later and caught up with his sister, she told him that his mother had been waiting for him to come. It’s quite brutal to read as her death was horrible, her spirit fighting to hang in beyond her physical pain. The sister tells him “It’s all right, you know, Mum understood that writing meant everything to you.”

It revived my own memories of my mother’s death. I was living in Sydney at the time and my aunt phoned to tell me my mother had suffered a heart attack and was in hospital. I’d just moved to a new flat on the North Shore and gone through an emotional romantic break-up. I stayed put. My Aunt phoned again three days later telling me I should come quickly. Reluctantly, I packed up my flat and job in one day and flew home. It took my mother a couple of weeks to die. She wasn’t in a lot of pain as far as I know, but she was very tired. A few years earlier my eldest brother had committed suicide. The last time I saw her, a nurse urged me to stay, but I had a bus to catch and a dinner date, so I said I had to go. I know now that the nurse knew my mother was dying, but she didn’t tell me. I made my dinner date and my mother passed away less than an hour after I said a cheerful goodbye to her. I often revisit this moment and wish the nurse had told me but too, I regret my own callow youth – I was impatient with her – she’d disrupted my adventures, I was anxious to be on my way.

So now there was just my Dad and me. One sibling was dead and the other was missing. As the hearse pulled up outside our modest Jerry-built post war weatherboard house – I was standing in the hallway with a view through the open front door – the phone rang and it was the missing child – not in a position to attend the funeral. I was used to life being askew, and this was just another permutation. We were a small team, my Dad and I and my Aunt and it took me motherhood, teenagers and becoming a grandmother to really know what happened that day. My grief came in unexpected moments over the years, tinged with regrets, and I was grateful, when my father died, that I was encouraged by the hospital to stay close, to sit still, to be there, and I was.

4 thoughts on “The simplest words”