I’ve been reading a friend’s tips for bloggers. The quirky, and highly original Rachel McAlpine has inspired me. I usually try to blog about things relating to my writing life or share my ‘writing’. Taking a tip from Rachel’s recent blog to bloggers, I’m tackling today, an issue that interests me. It’s about food and its on my mind.

We’ve just said farewell to our son, daughter-in-law and granddaughter who flew home to Seoul last night. While they were here, I enjoyed preparing and cooking food for them. It’s a pleasure I share with my local granddaughter. We are happiest together in the kitchen cooking. She particularly loves licking the bowl when baking cakes, at the creamed butter and sugar stage. Not to mention whipped cream! We prefer the Zany Zeus or Lewis Road double cream (the sort of cream we took for granted back in the 50’s and 60’s). My Korean daughter-in-law loves my meringues. I use the very simple ‘Bill’s Food’ Bill Granger, recipe for these. They never fail.  My son from Seoul adores Bill’s white chocolate cheesecake recipe (again, very simple).

One of the new easy highlights over this holiday, was a recipe I used from Annabel Langbein’s ‘Through the Seasons’ (Melt in the Mouth spiced stone fruit). I cooked apricots, plums and nectarines for three hours in the oven at 120 C, marinated in sugary water, vanilla and star anise. The flavour of the fruit intensified although still for me, the acidity remained. But with sour cream and brown sugar, the acidity was counter-balanced nicely.  Living in Seoul for 4 ½ months last year, I feasted almost daily on frozen mango chunks and a highlight always in Korea, is eating Mango Bing Su. I am selective about which fruits I eat. My digestive system seems to find most fruit too acidic. Whereas my husband eats fruit every day and especially loves stone fruit. I seem to live on bananas. 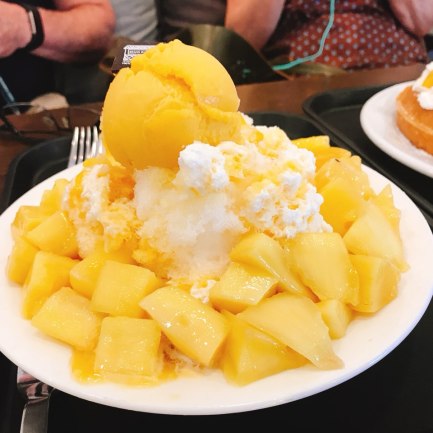 This morning reading the Herald newspaper, I saw an article on the problem Kiwis have with gluten. I can admit to being one of those Kiwis. Mine is not a serious gluten allergy, but I have learned to manage my intake. In 2013, I spent three months in Siem Reap as a volunteer ESOL teacher and found all my digestive issues miraculously vanished. My specialist said it could have been the Cambodian rice. Who knows?  I found in the heat, I lost a lot of weight, even though I was drinking half pint 50c beers at night to cool down. So, I began visiting the Blue Pumpkin cafe each day to drink coffee and eat a mille–feuille. I didn’t gain weight, but I also didn’t have any issues with the pastry. 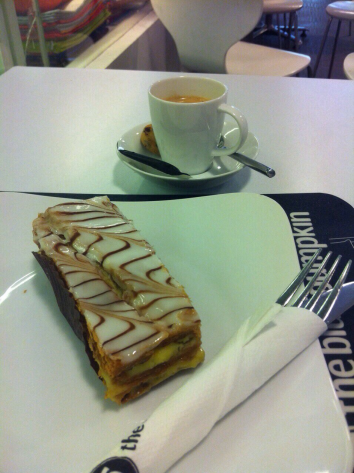 This set me to thinking about my fifties and sixties childhood. We didn’t eat much bread back then. My mother was a wonderful cook (coal range) and we always biked home from school to eat cooked lunches. We didn’t own a car, so as a result, we didn’t do ‘picnics’ very often. So, sandwiches were not really part of my repertoire. And I often choose a small sausage roll rather than an overstuffed, oversized focaccia at a café.

Over the past ten years, I’ve spent quite a lot of money, buying ‘gluten free’ breads. Not enjoying them that much but mostly for toast. Then I worked out that sourdough bread seemed different and was more easily digested. A neighbour who makes her own, gave me some of her sourdough scoby. My first loaf was a miracle loaf (photo included).  My subsequent loaves have been delicious but not as perfectly formed. I tend now, with loving care to my scoby. 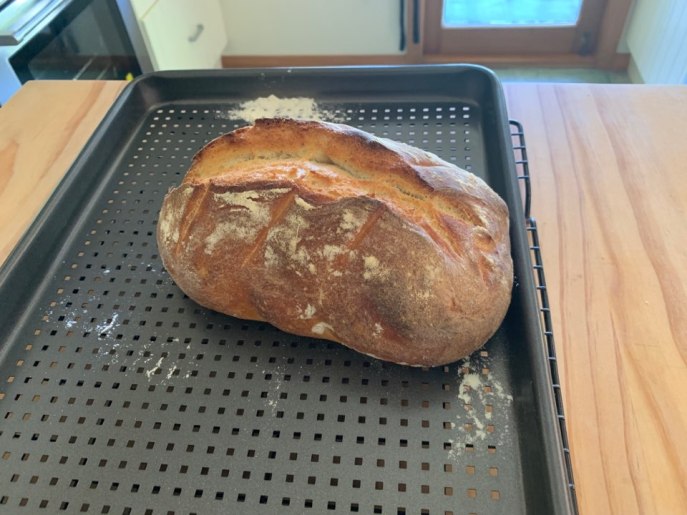 In the 1970’s, I lived in Norway, doing my Kiwi OE.  I worked in a ski resort in the Haukeli mountains and learned to make Danish breakfast rolls (rundstykker). I haven’t made them in years, but when our son was here with his family from Seoul, we had a picnic in a local park (a Kiwi BBQ) for his friends and their young families. I made rundstykker and they were very popular (easy to make but not gluten free). I’d forgotten how light and delicious they are. 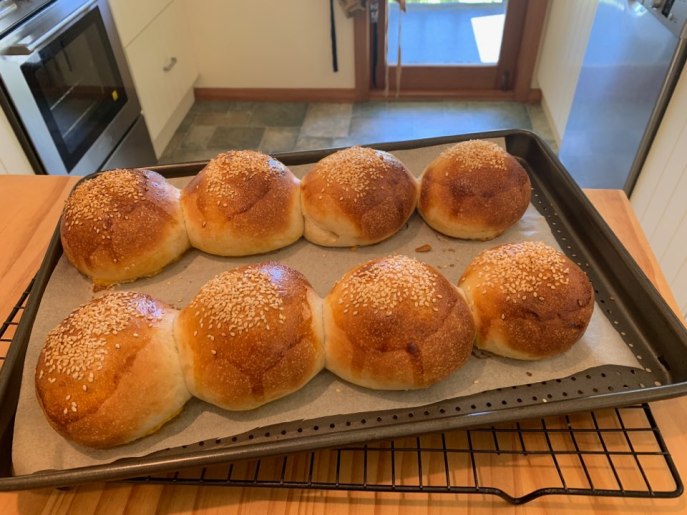