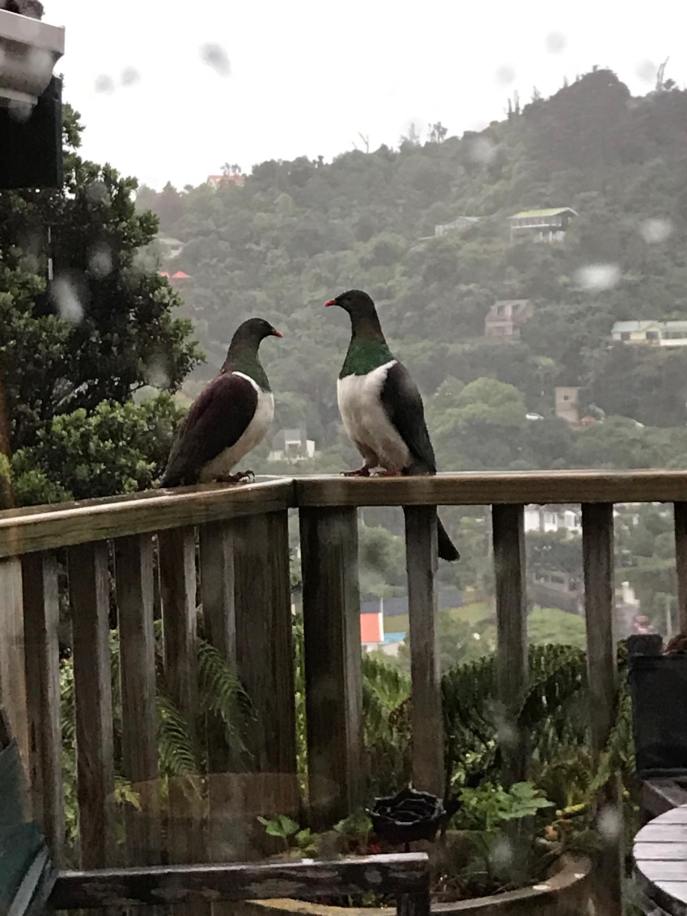 These two came to visit us one evening. We’ve lived in our house on the hill for over thirty years. Usually, the kererū (wood pigeons), dive bomb us on our zig-zag path down to the road. They dance on flax bushes and crash through the bush at almost head height, frightening me frequently, followed by my joyful relieved laughter.

It’s a privilege to live among the bush and birds. For twenty years we had a cat called Red who roamed the sloping roof of our elderly house. She never killed the kererū or tui, but when Red died, we found the smaller birds (sparrows, blackbirds), got cheekier and came closer on our deck. They had obviously kept away.

This beautiful photo is of two kereru sitting on our deck railing while we were inside eating dinner. We had planned a BBQ but the weather closed in. Someone on Twitter suggested the birds are wearing white aprons, ready to do the dishes. Someone else suggested they are making their vows. And indeed, we held a wedding in our garden late December 2017. A friend said, the kereru heard we do good weddings.

So, this image, taken with a phone, through the glass, has struck a chord with many people on Facebook and Twitter, so I decided to share it with you, my blog readers.  Our house goes on the market late January (this is not a sales pitch), and this image of the kererū will see us through as we shift our view to further up the hill.